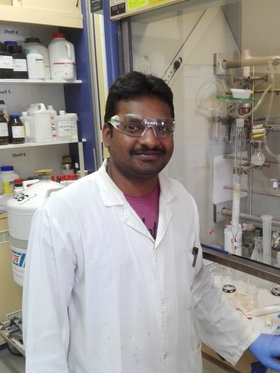 After qualifying CSIR-JRF in December 2010, he joined the Department of Organic Chemistry, Indian Institute of Science(IISc), Bangalore, for the Ph.D. programme in 2011, where he worked with Prof. K. R. Prabhu in the area of C-H activation and earned his Ph.D in 2016. During his doctoral research, he has developed simple, short, economic and practical methods for the regioselective access for C2 and C4- functionalization of indoles by using directing group strategy. From March 2017, he joined Prof. Ilan Marek’s lab at IIT-Technion as a postdoctoral fellow and currently he is working on selective functionalization of strained cyclopropenes to obtain highly substituted cyclopropanes followed by ring-opening.